A virtual assistant that collects housing and roommate information for struggling renters.

When I worked at 58.com as a UX Design Intern, I led the research and design of the Fangfang project over the summer and collaborated with product experts in the company. Product experts included data analysts, UI / UX designers, researchers, design leads and product managers.

58.com Inc. is China's largest classified online marketplace. It was launched in 2011 and now has around 100 million users.

58.com contains local information across various content categories, including jobs, real estate, used goods, automotive and yellow pages. In 2018, we found out that many users were looking for shared homes due to increasing rent in big cities. The company wanted to improve the product experience, and I was helping to explore and redesign a product for 58 users.

I continued the design after I left the company, including a new visual guide for Fangfang. 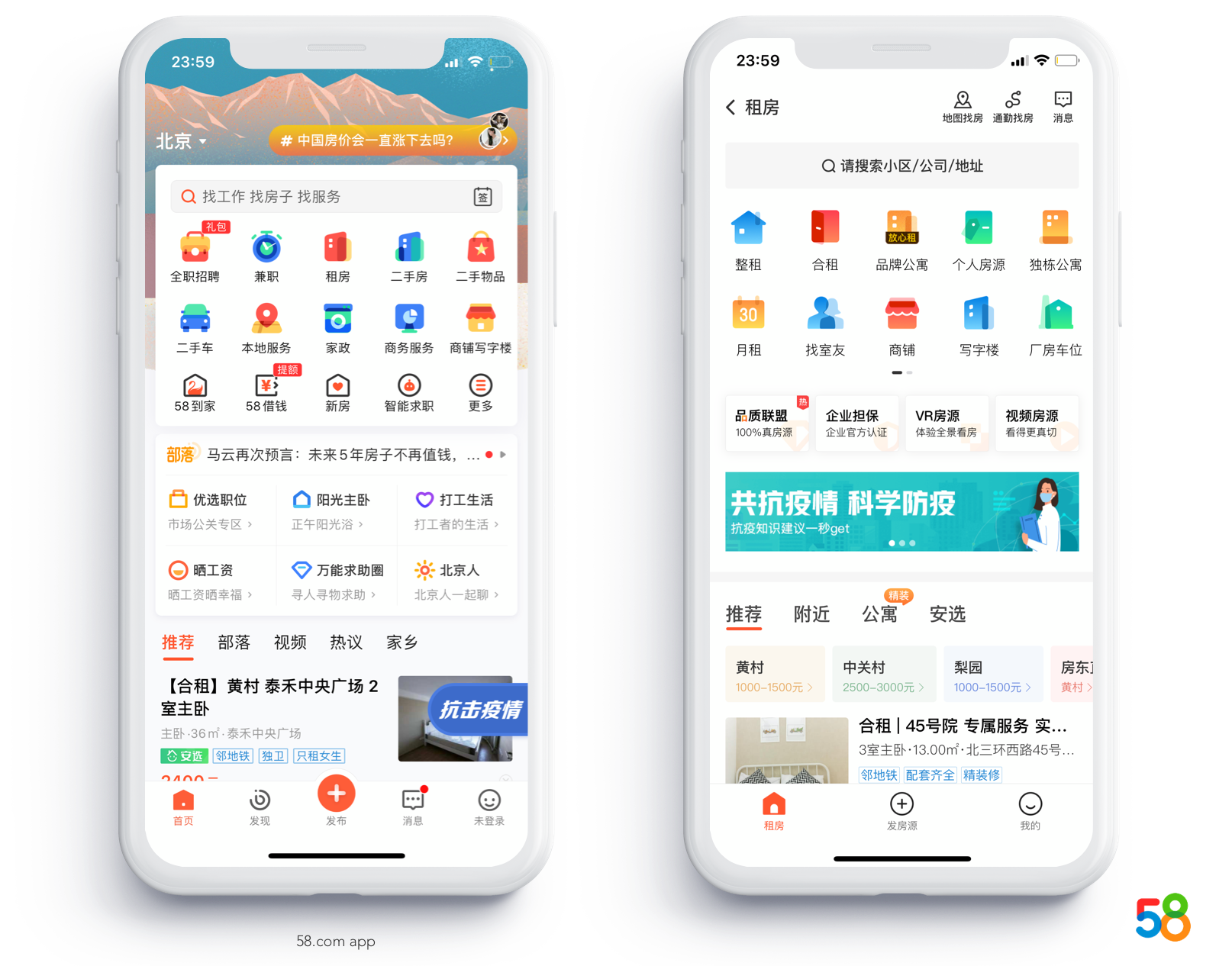 it’s really hard for renters to find good roommates and a nice home at the same time.

Young people come and stay in bigger cities because of their work and families, but finding a proper place to live is tough:
- People gradually lose their patience throughout the searching process.
- Passive communication brings problems between roommates.
- People feel helpless but there is nothing they can do. 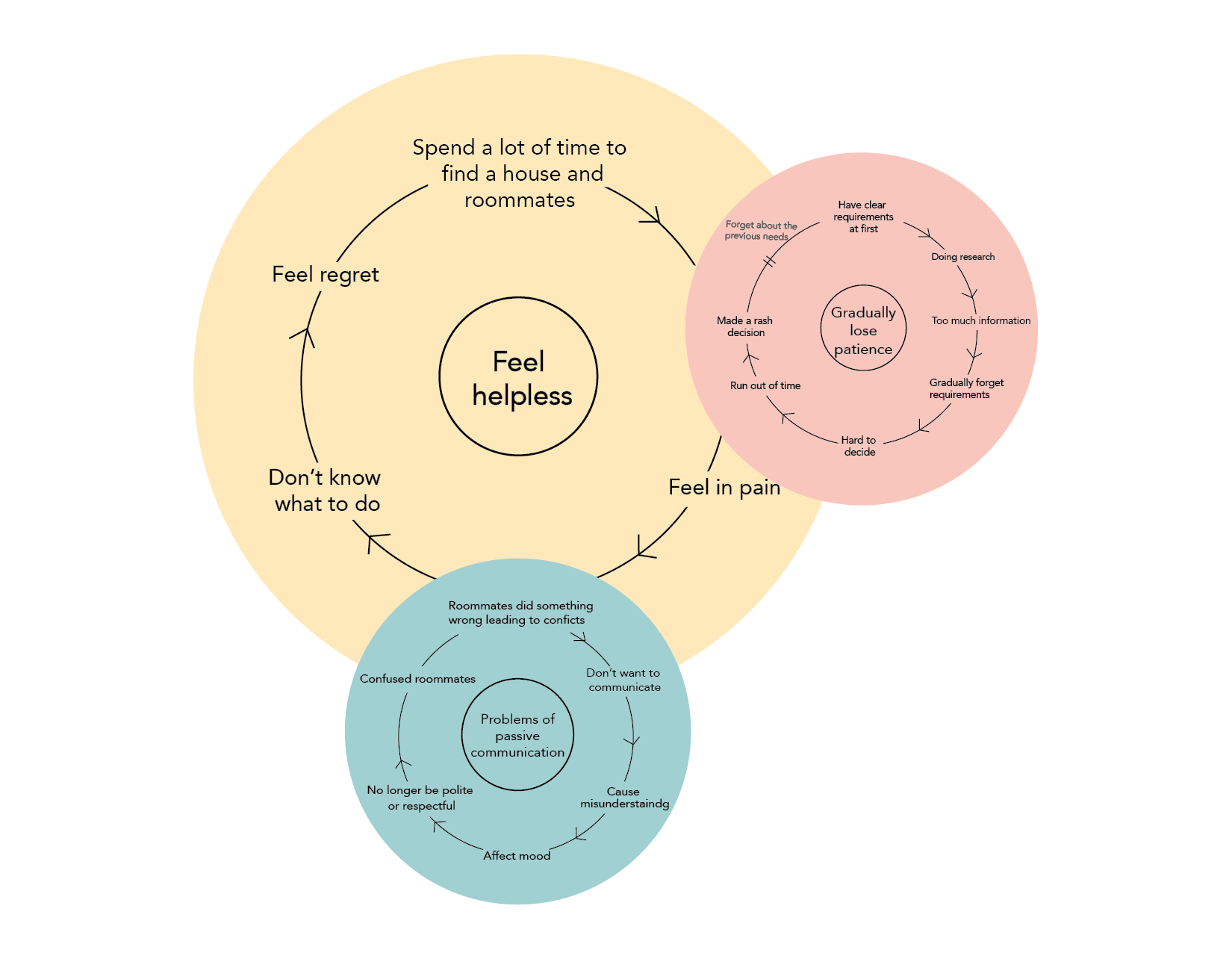 How might we help renters find appropriate homes and roommates at the same time?

FangFang is a virtual assistant that collects housing and roommate information for struggling renters.

Our goal is to help renters find a comfortable home in the bustling city. And Fangfang is an efficient and simple way to offer people a perfect match.

Besides the room information, Fangfang also provides roommates' information at the same time. People can find other people's information by clicking their profiles. 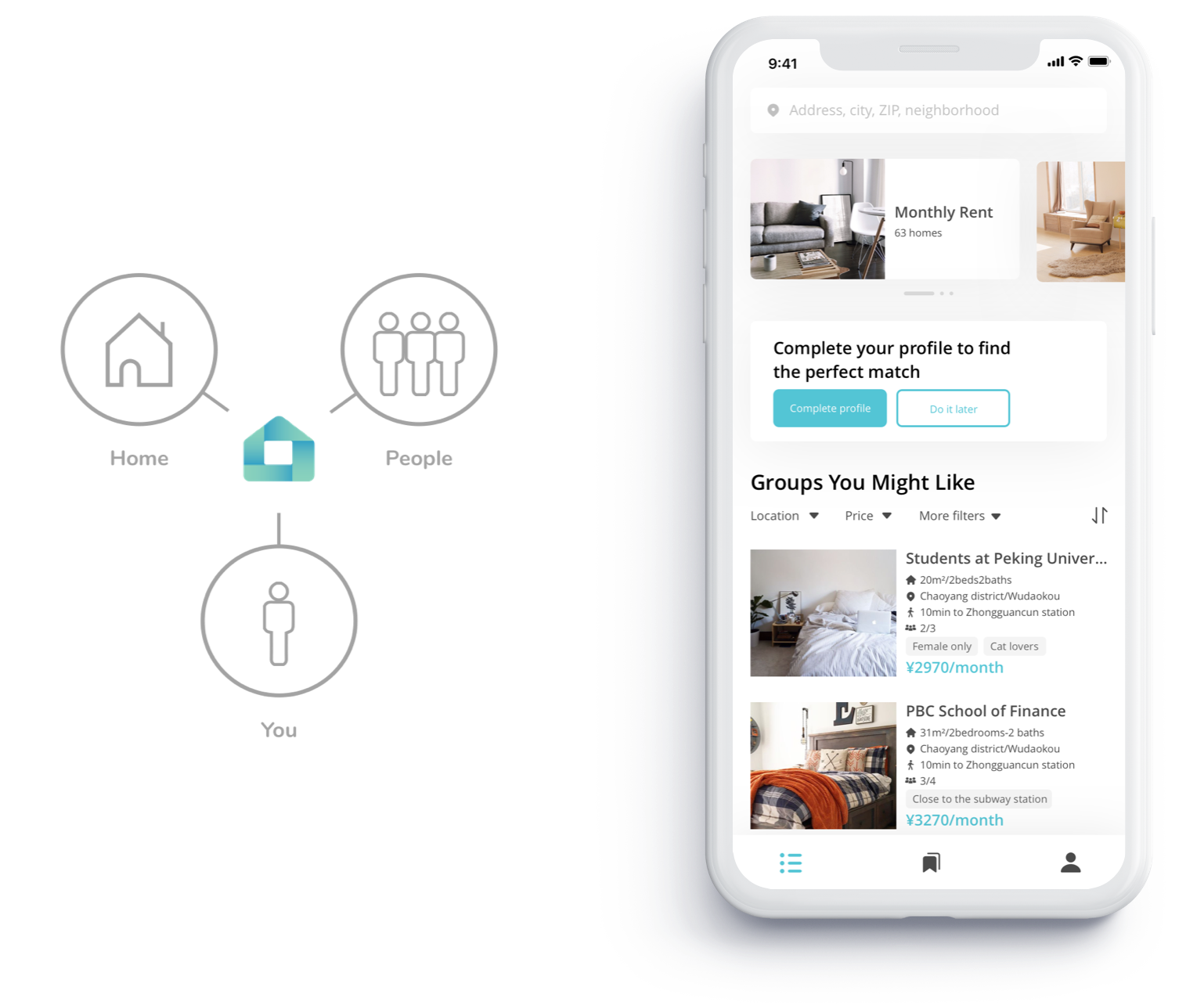 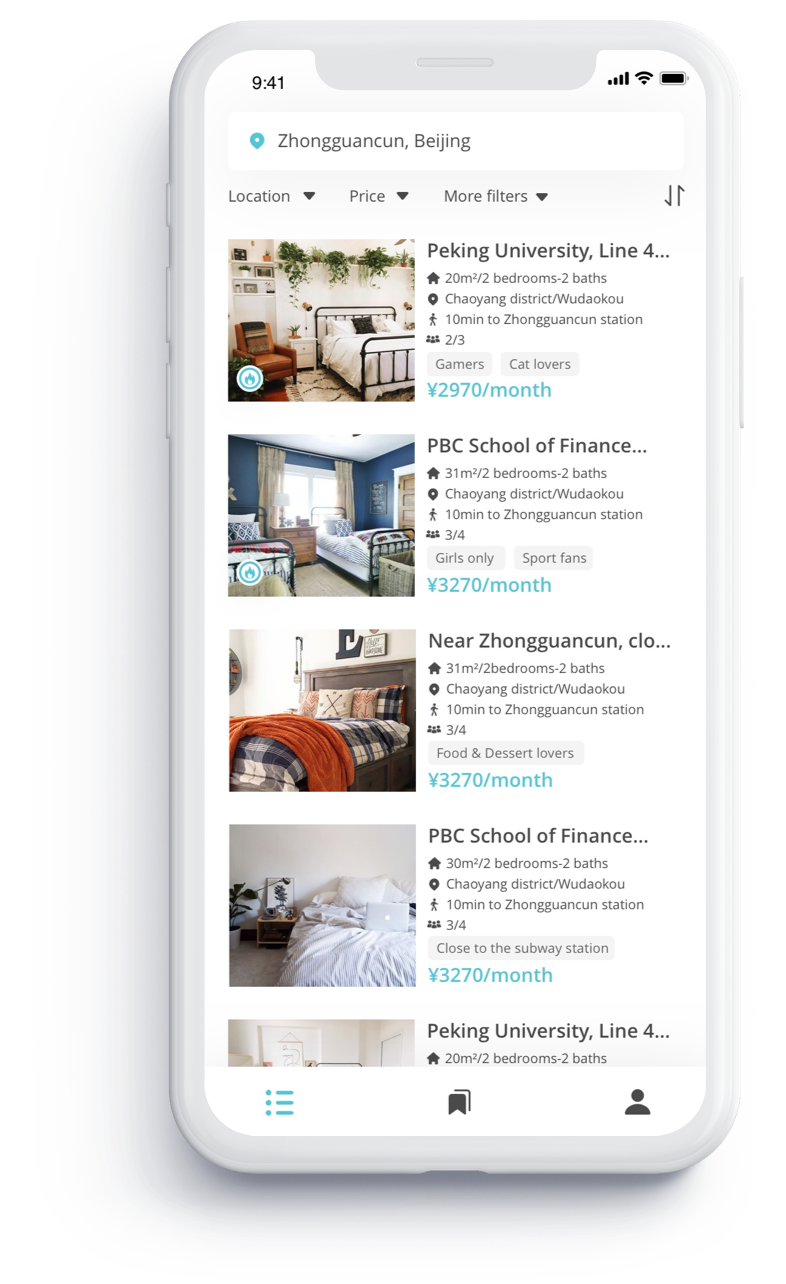 Besides location, some users have specific requests such as move-in date, duration, room type, or a roommate’s gender. Users can filter information, and Fangfang will help them match with an appropriate home. 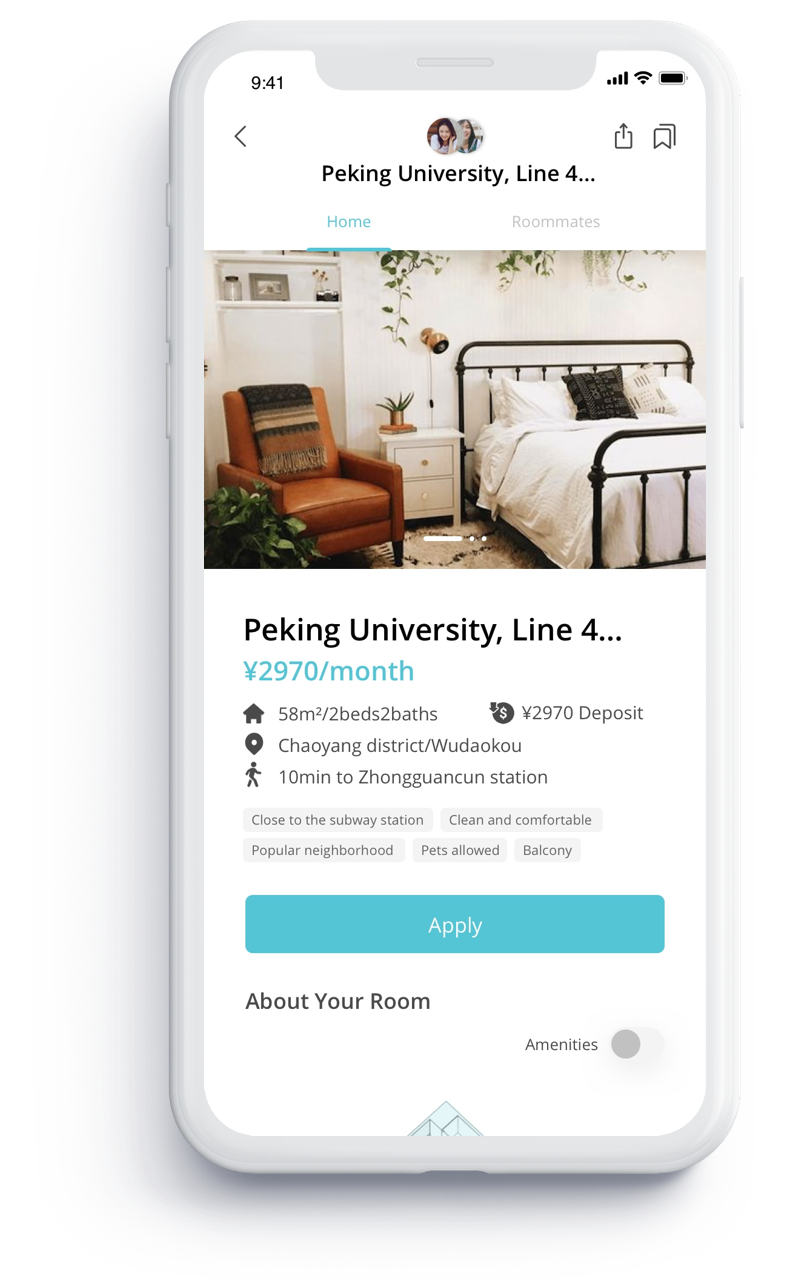 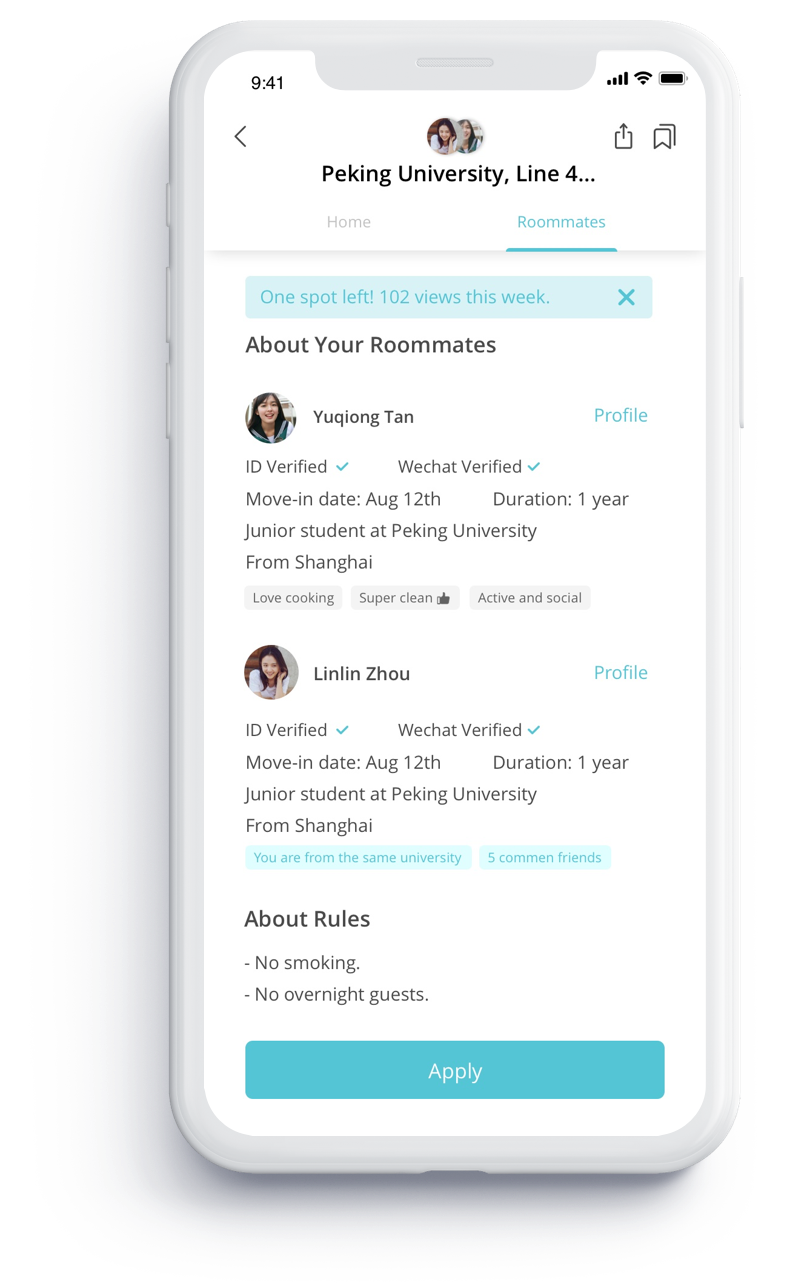 It can create problems when roommates don't know enough about each other’s lifestyle and background. Users can click on roommates' profiles and get to know them including their lifestyles, personalities, interests, and expectations on their profiles. 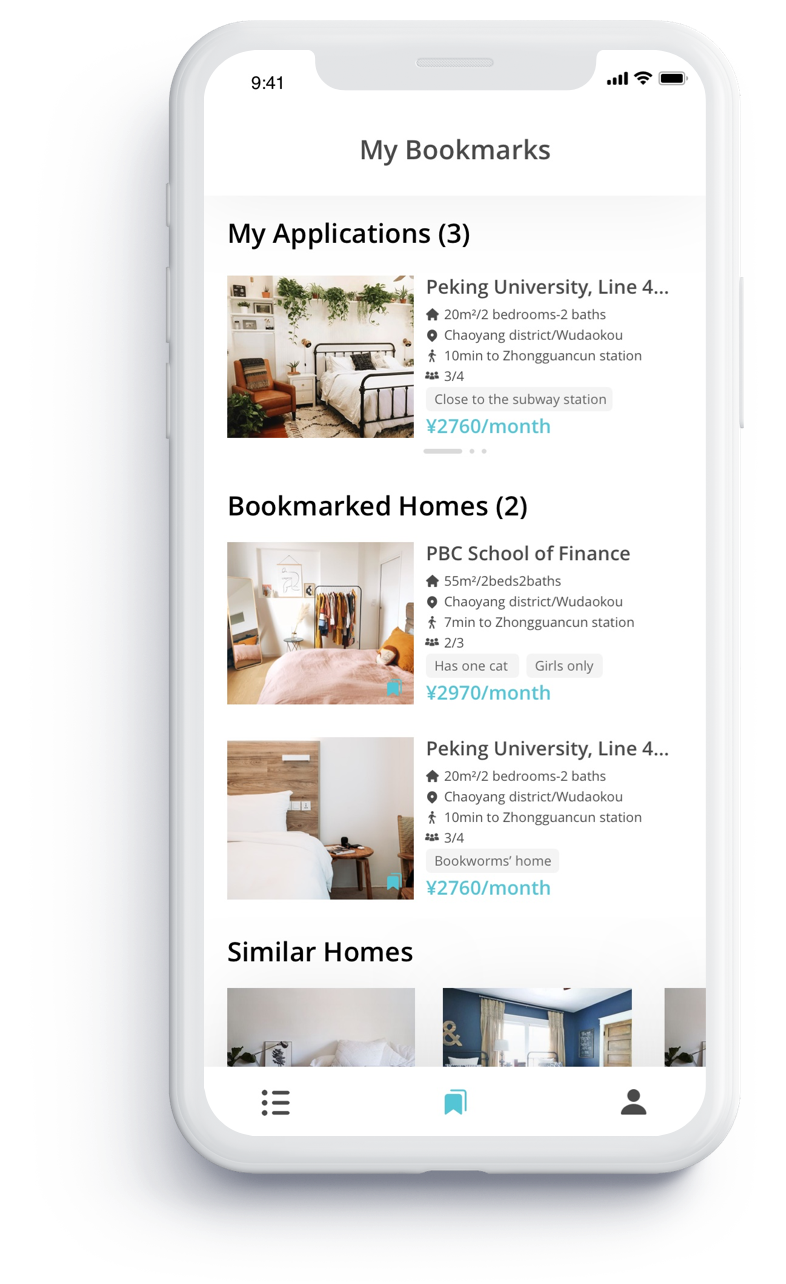 Each user can only apply to three homes. If someone would like to send more than three applications, they’re required to delete previous applications they’ve sent or wait for responses from them. 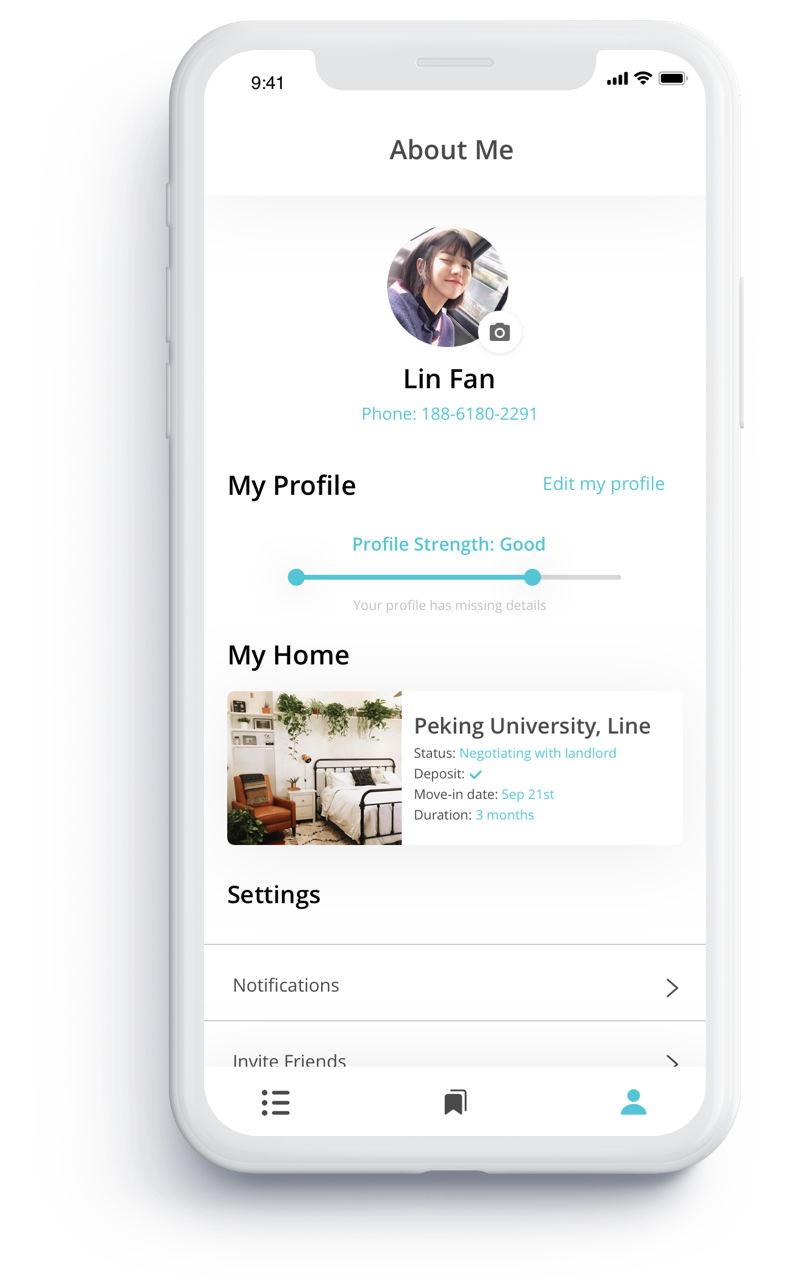 It’s important for profiles to include details and descriptions! Updating the profile helps landlords and roommates know more about renters during the application process.

The conducted research and product strategy helped the design and product team at 58.com. I left 58.com after I finished my internship, but some design ideas from our brainstorming sessions are implemented in the app.

13/13 testers had positive feedback on this concept

60% of testers said they wanted this app

The internship was 3 months.  I was responsible for conducting user research and proposing design principles. I finished the final design prototype after I returned to the US.

User research was quintessential. I gathered as much information as I could from the end users to understand their characteristics and the challenges they were facing. We interviewed 15 users from different cities. We used various research methods such as empathy maps, mental models, and personas, making it easier to communicate with the team. 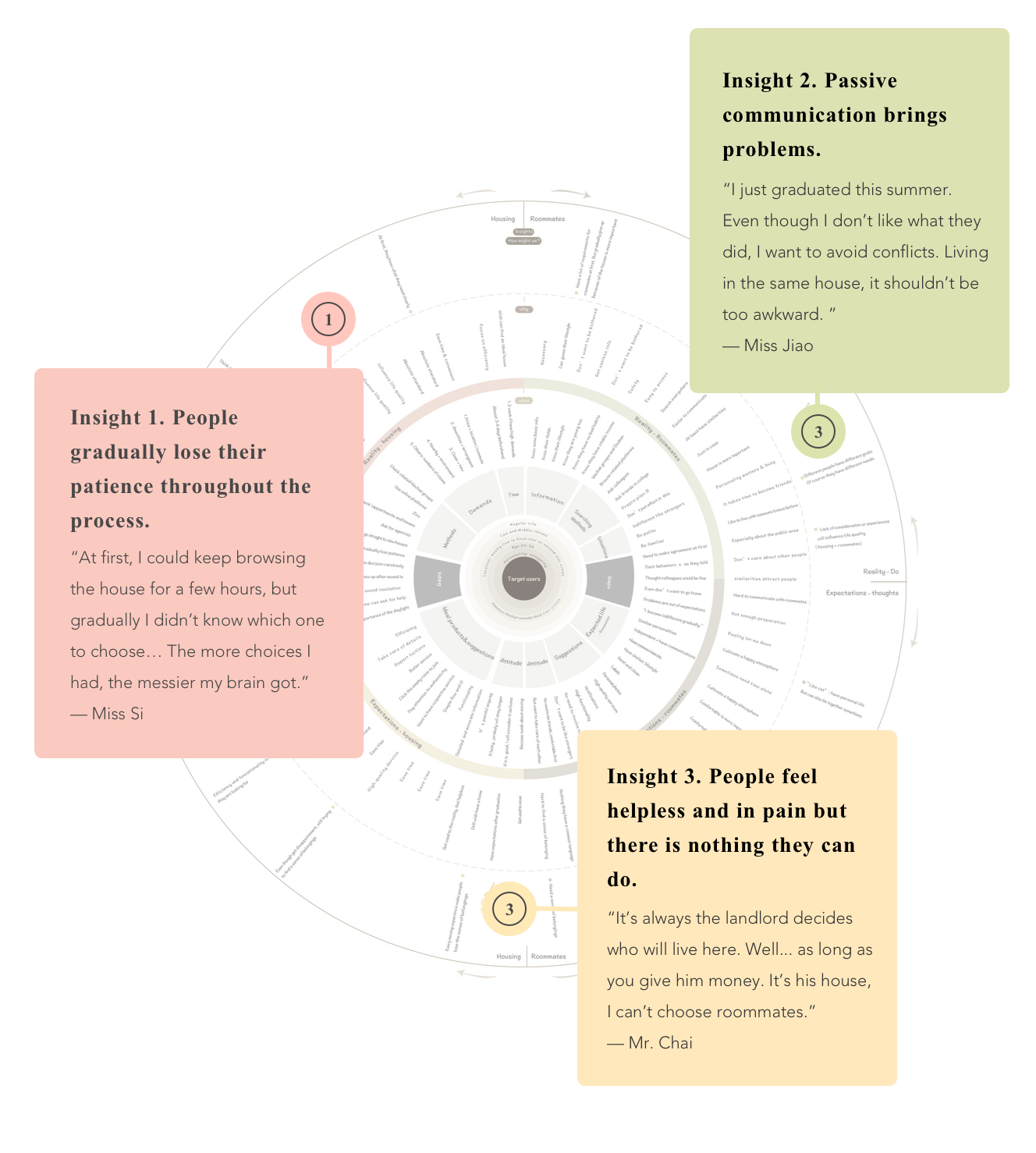 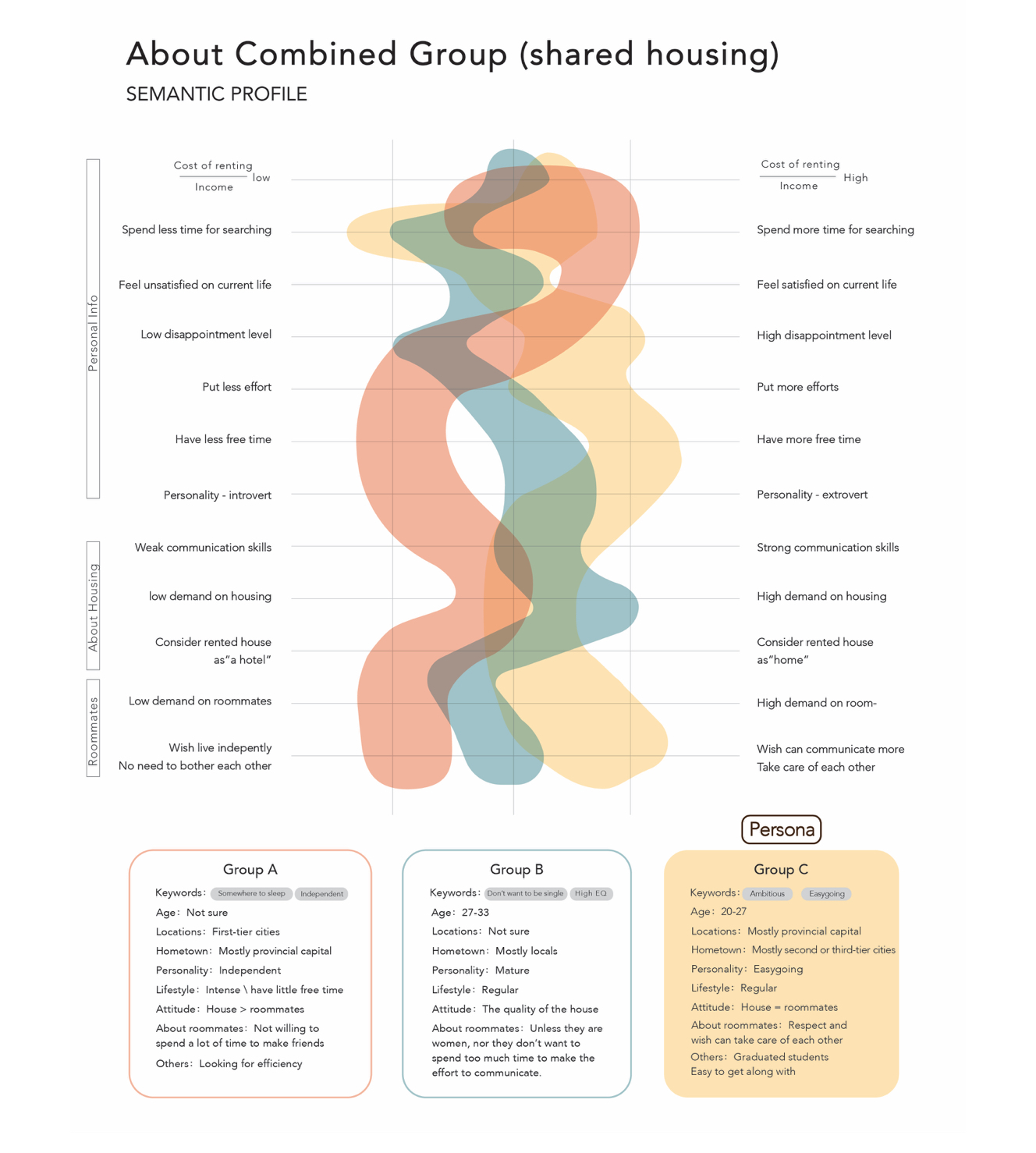 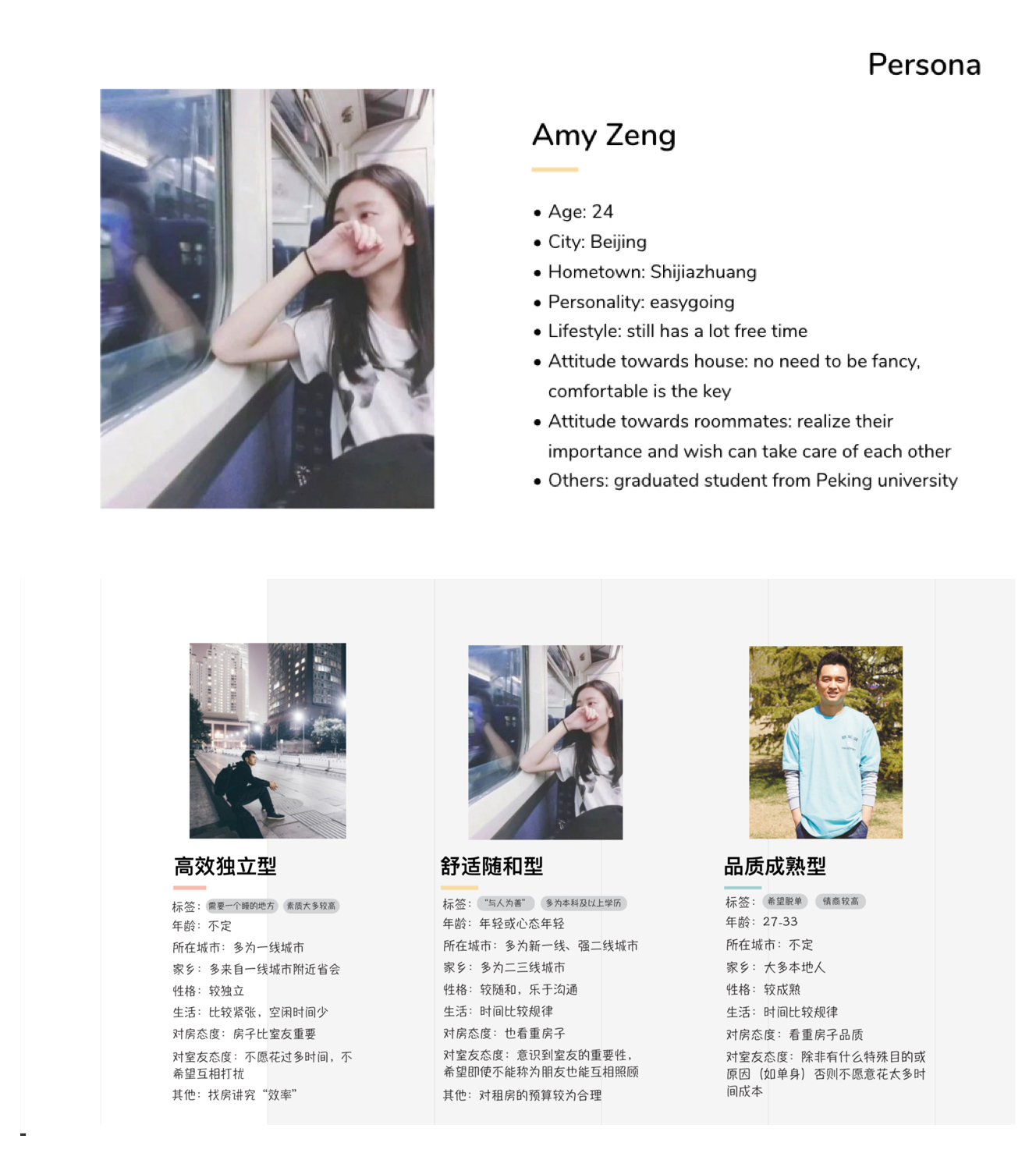 After two months of research, we gathered one ecosystem map, three insights, one mental model, and one semantic profile including three personas. These were the foundation for our product directions.

I generated three "How might we's" from our insights, and I used these to organize three ideation workshops in the company. Over 60 people participated and devoted 300+ ideas including researchers, UX designers, UI designers, design leads, and product managers. 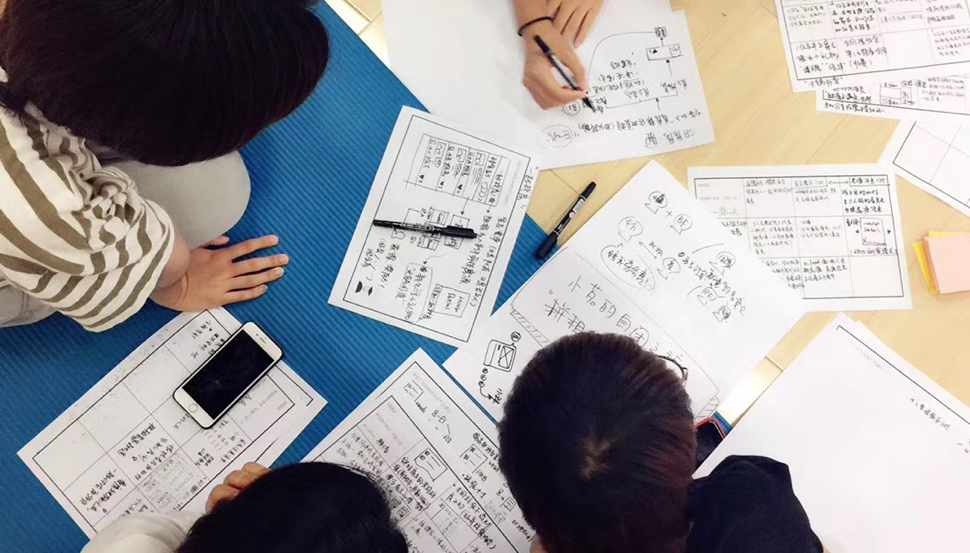 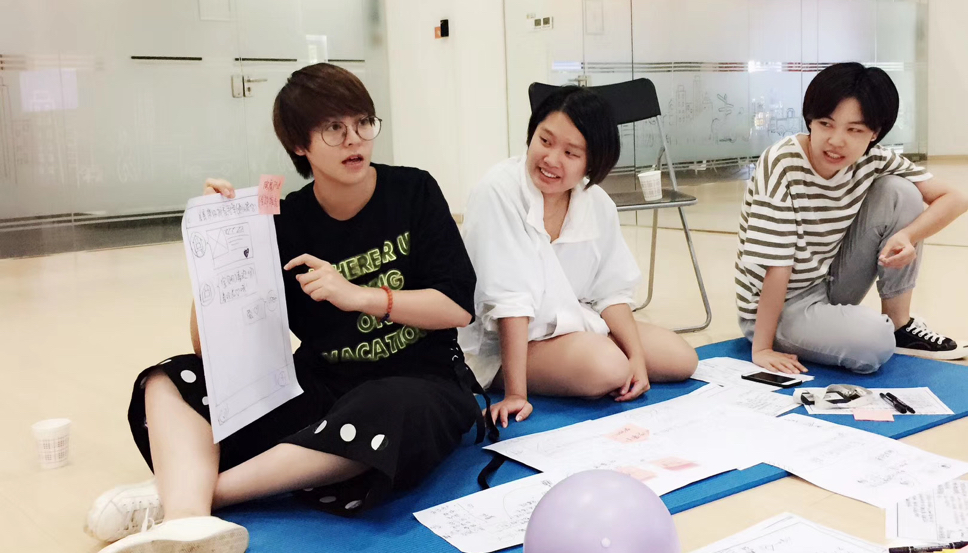 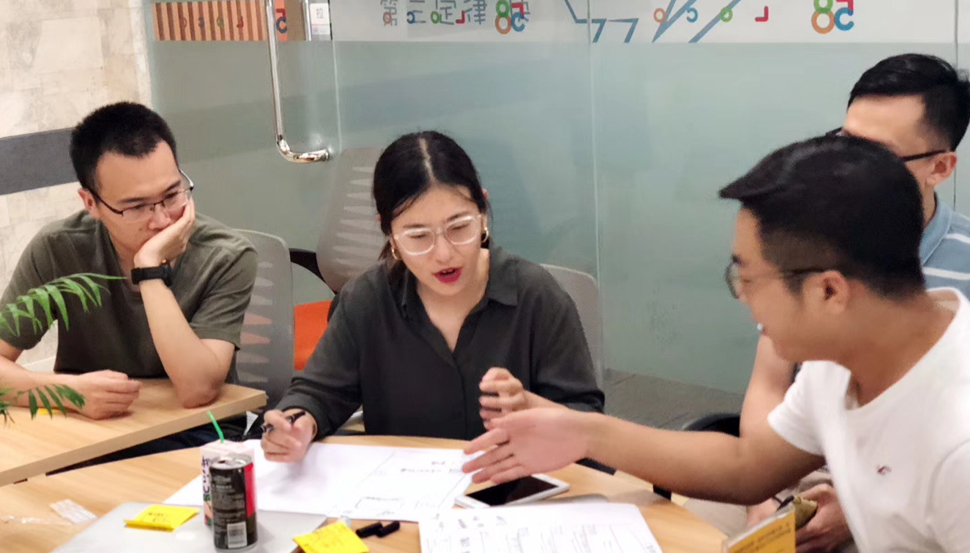 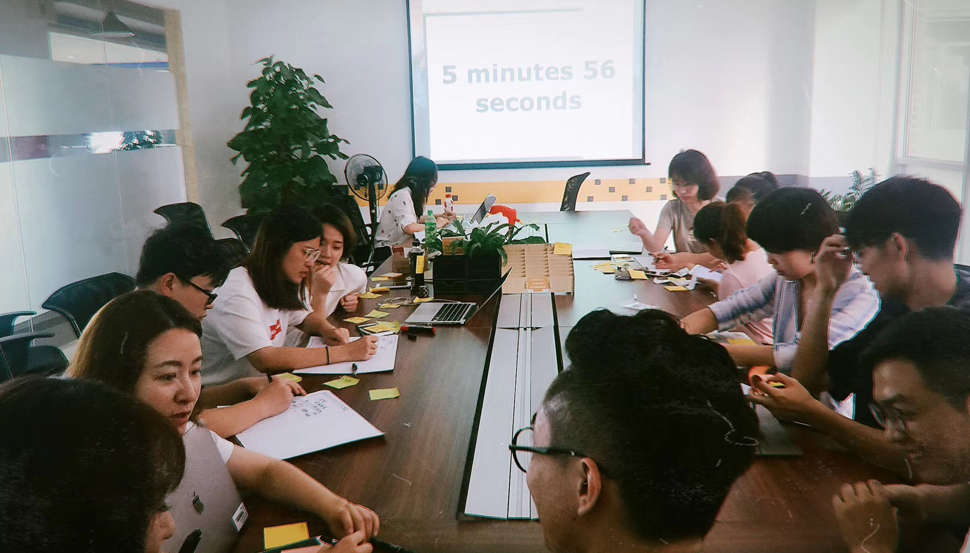 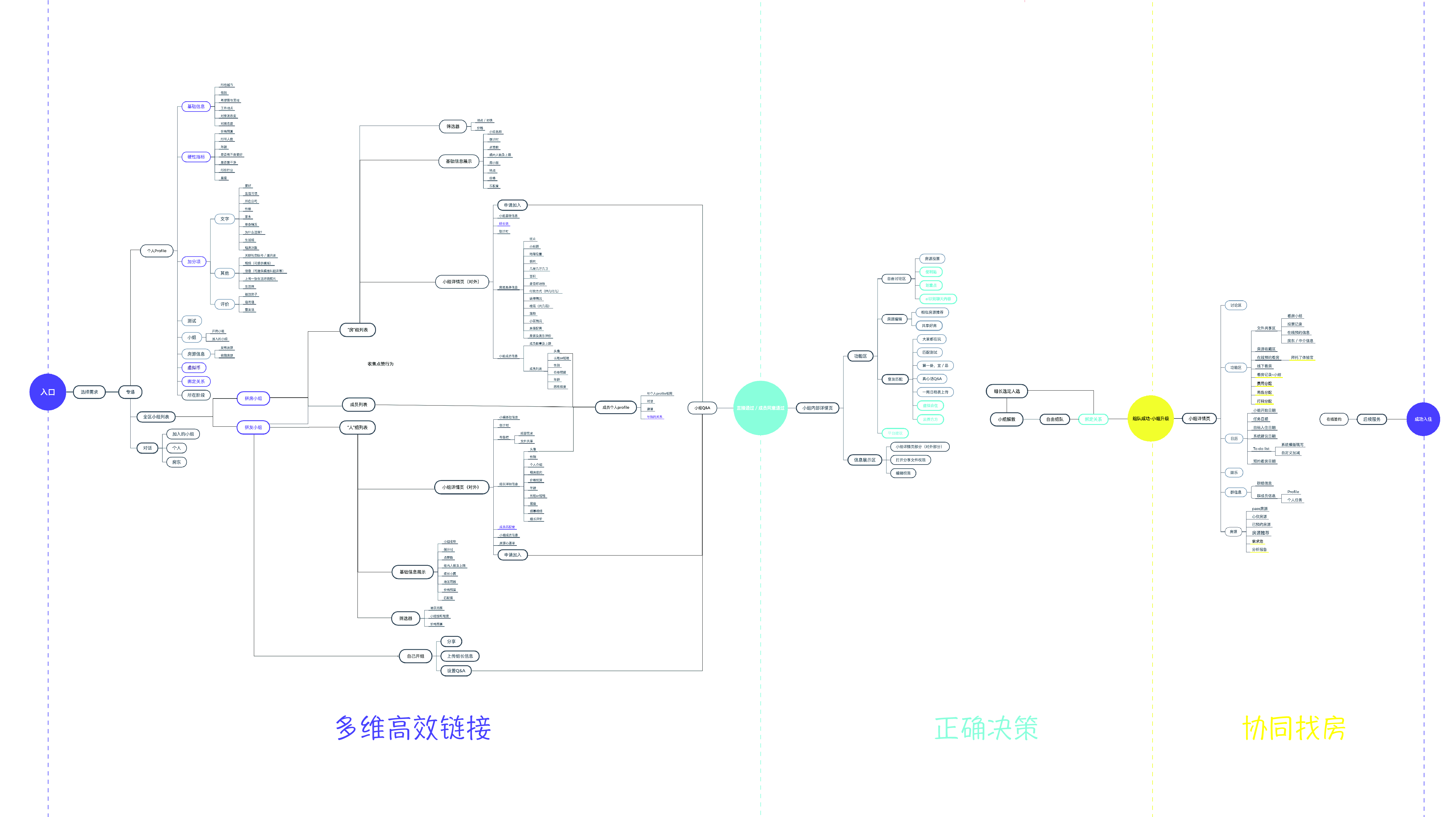 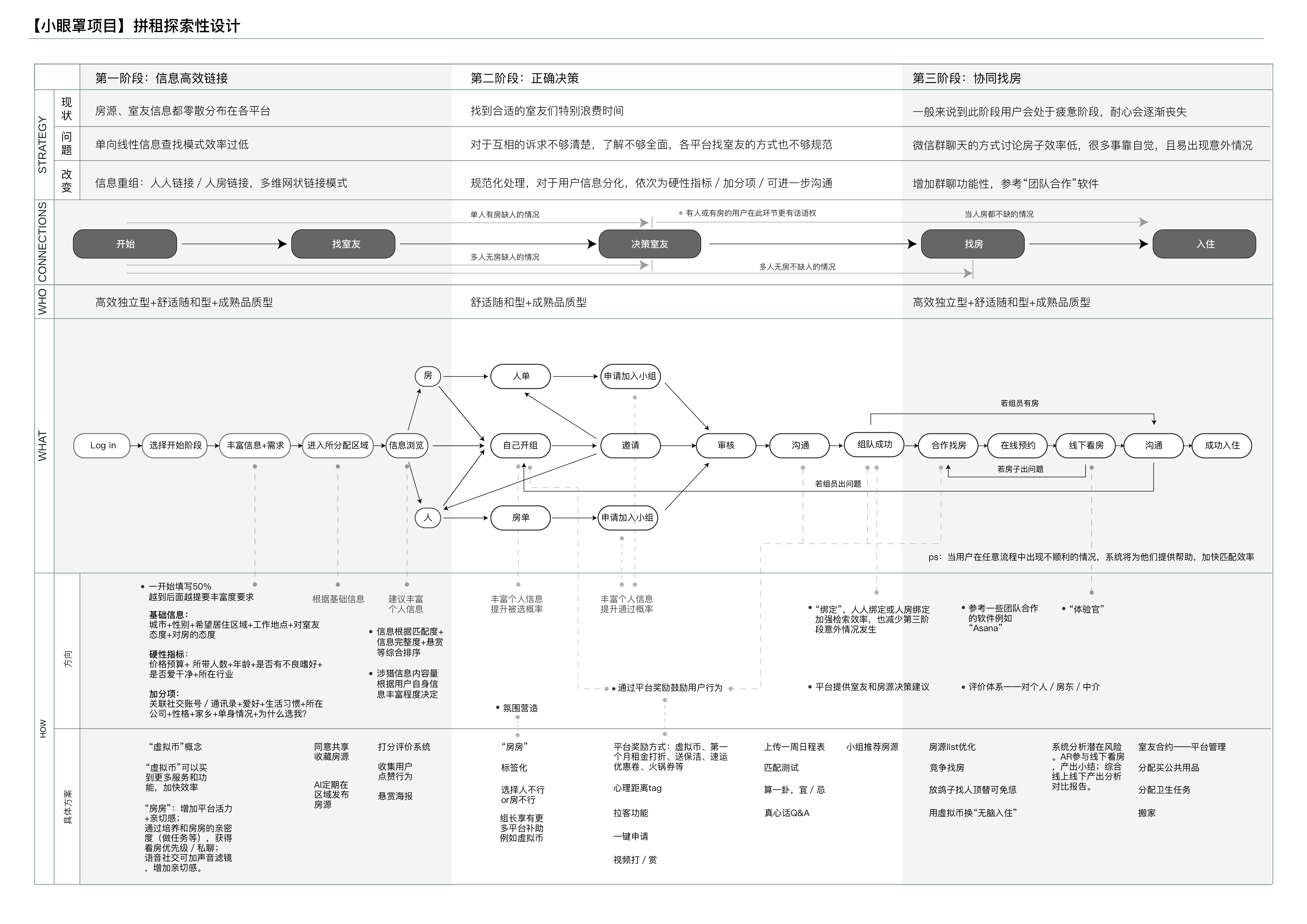 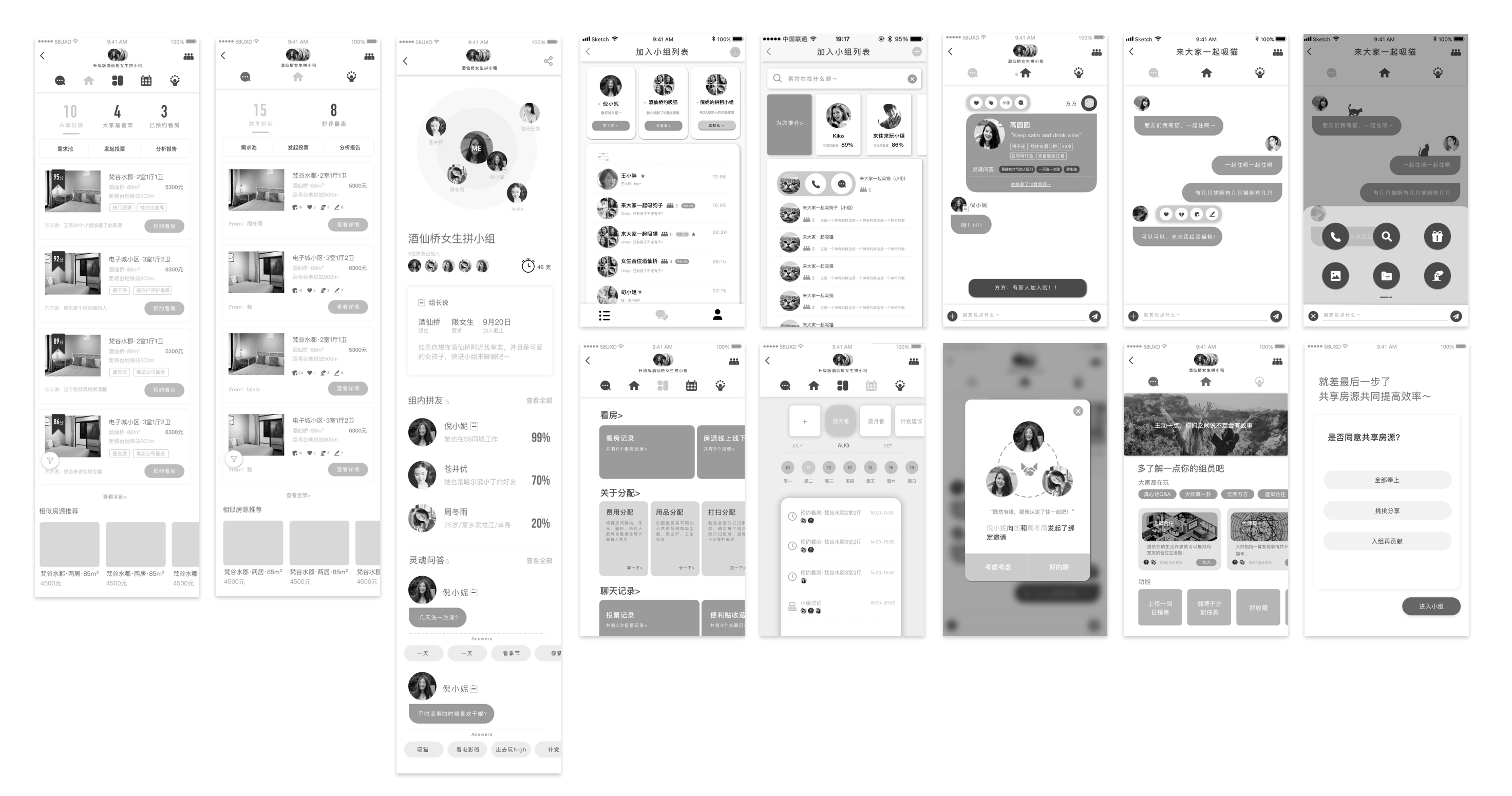 We spent too much time on research and workshops. I only had two weeks to summarize the design. Then, the biggest challenge came -- we had 300+ ideas. I filtered some of them, but we still had 40+ ideas left. With our colleagues help, we decided that Fangfang can help groups of renters join, connect, and find homes together.

"We really like your research, but you have too many features on your design..." After the presentation, I received this feedback from my team. My internship ended in August, so I decided to finish the rest of the design by myself. In this second round, I received a lot of positive feedback. 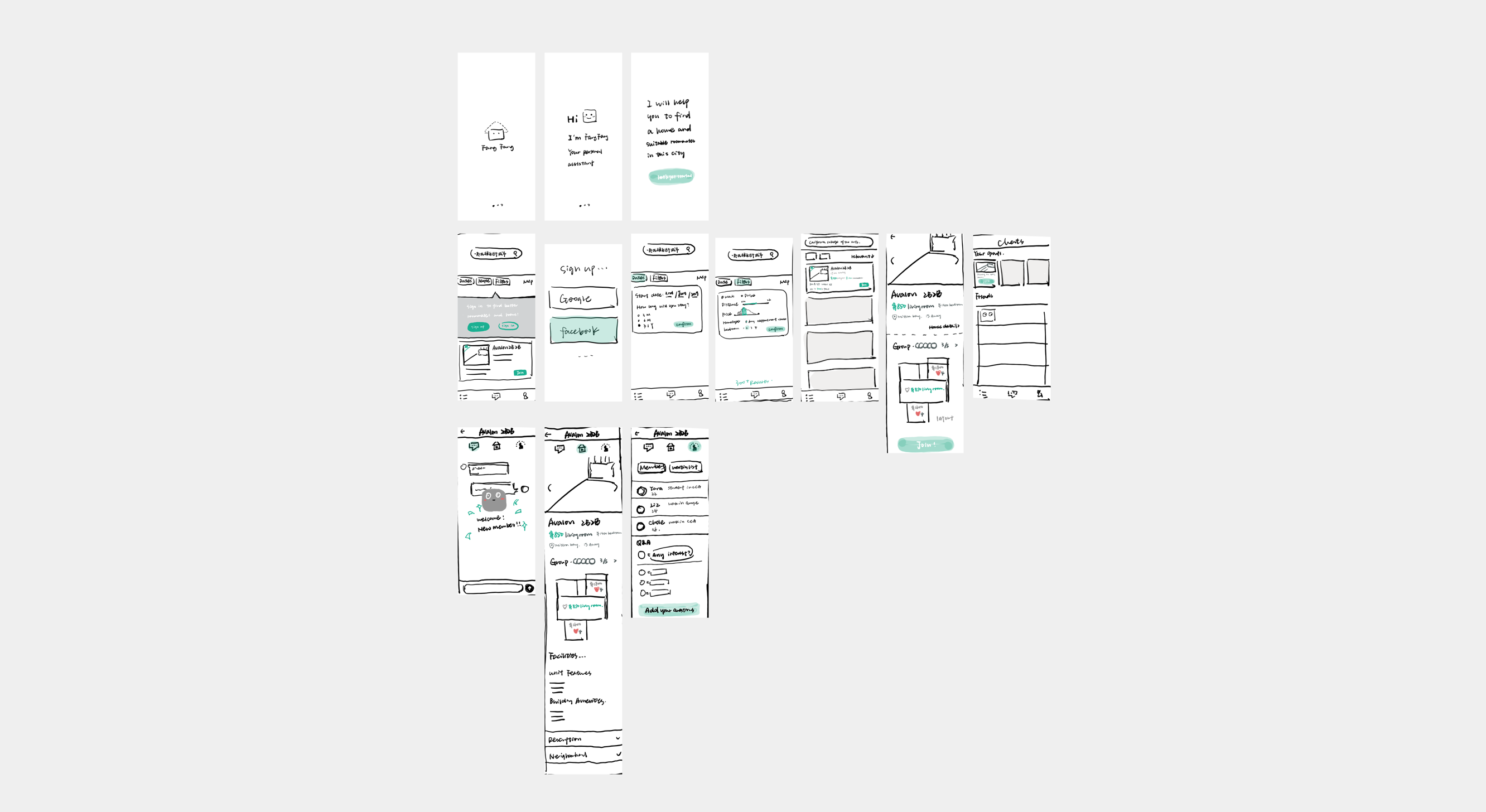 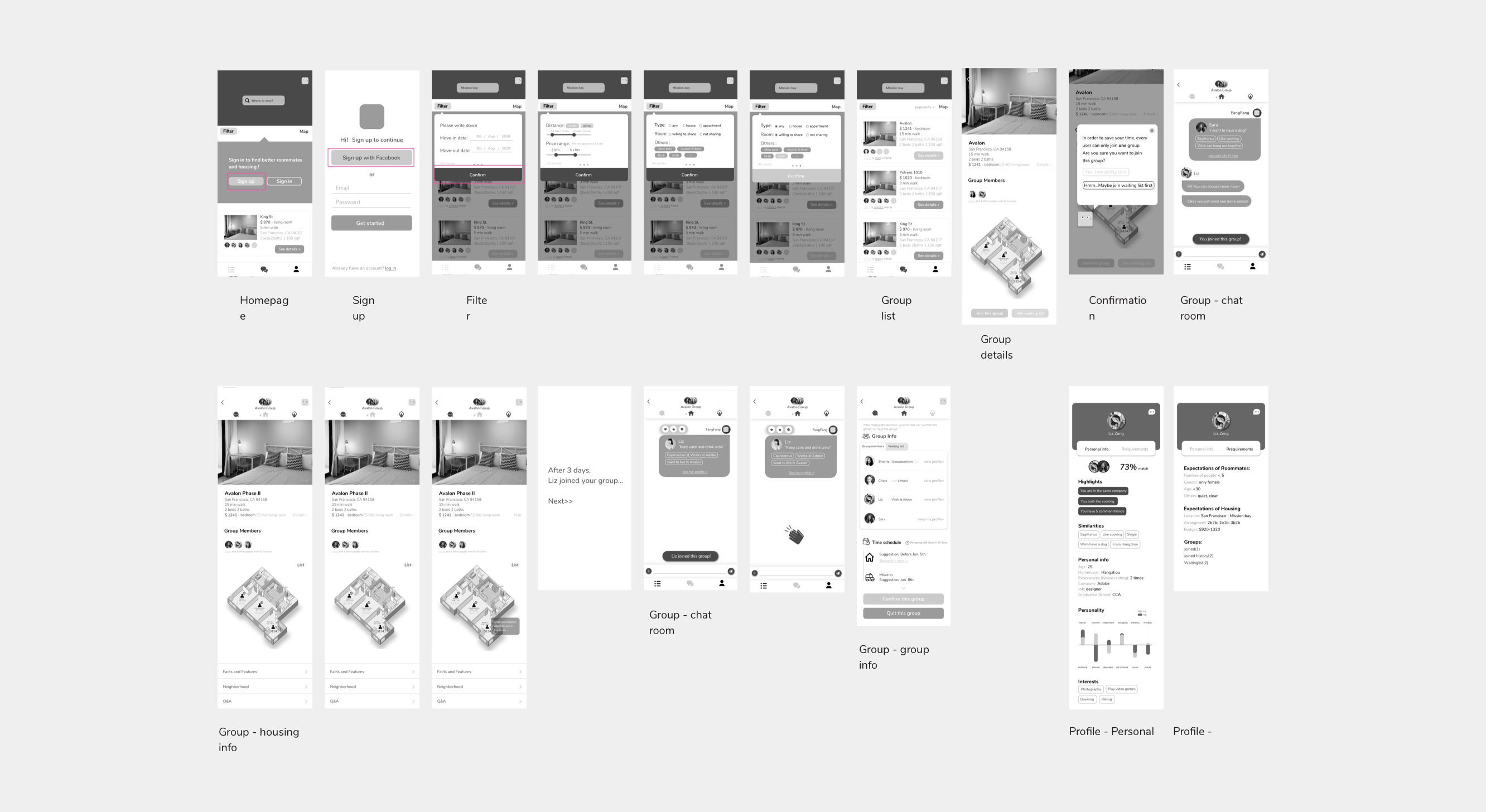 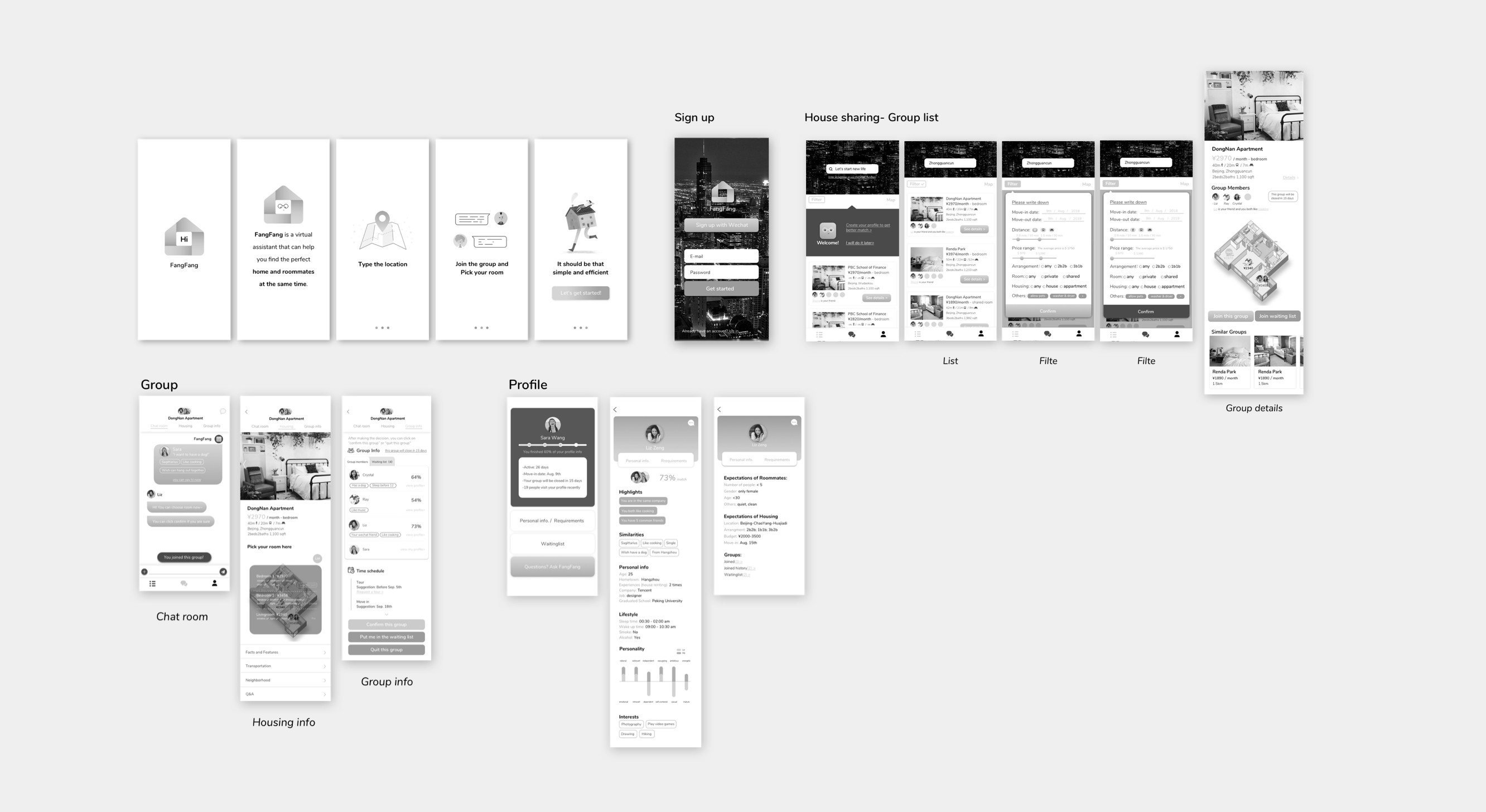 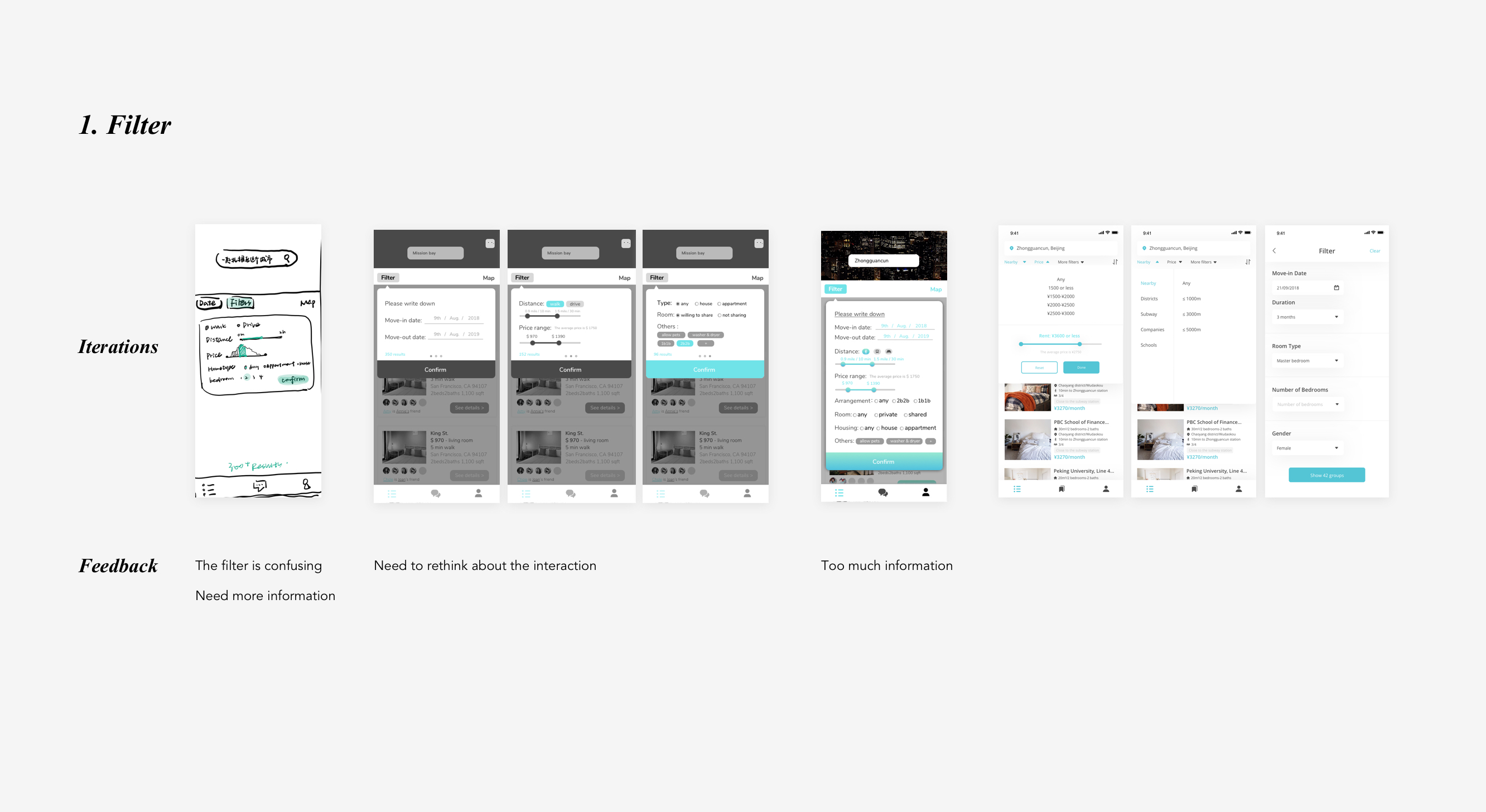 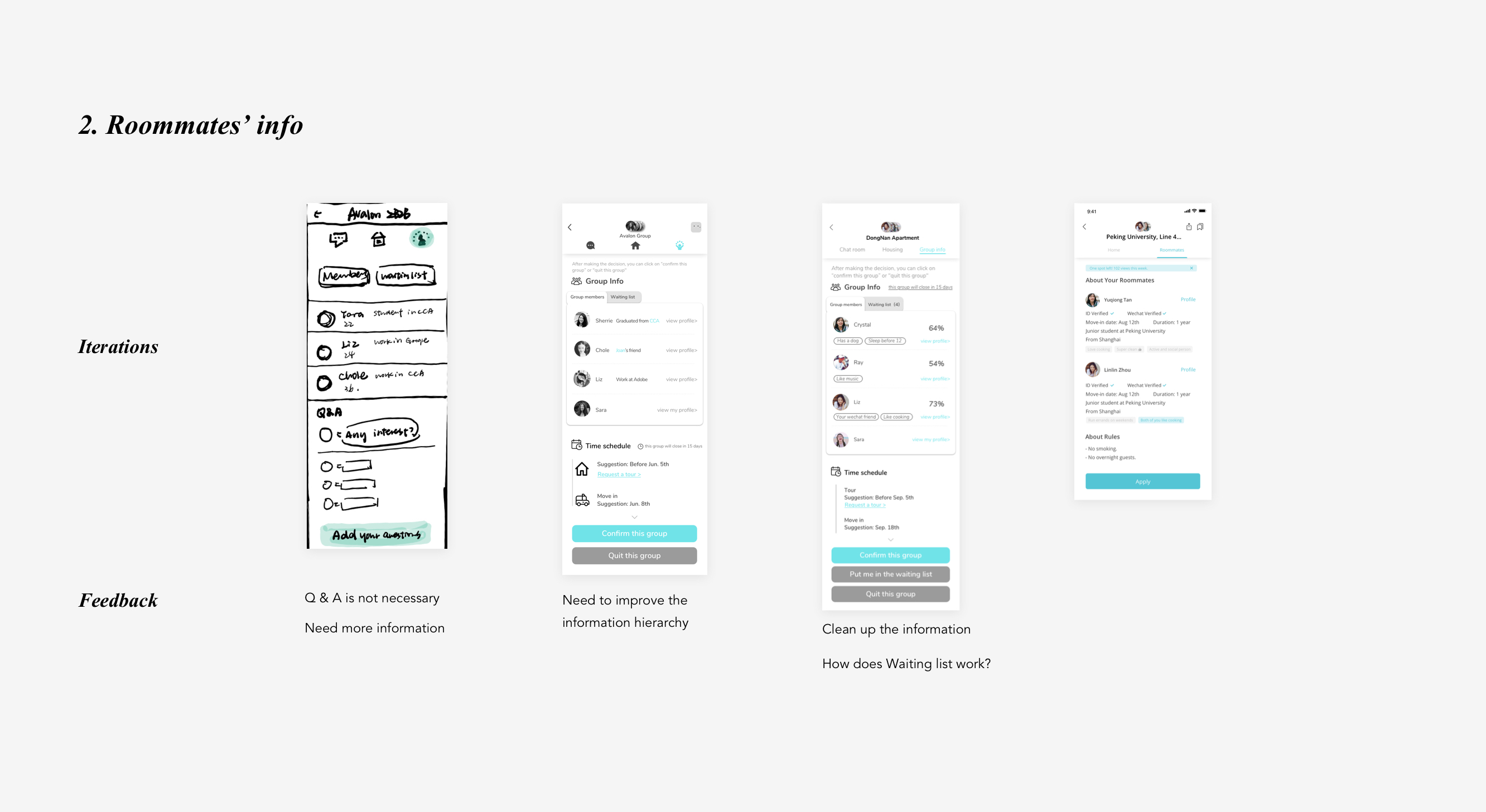 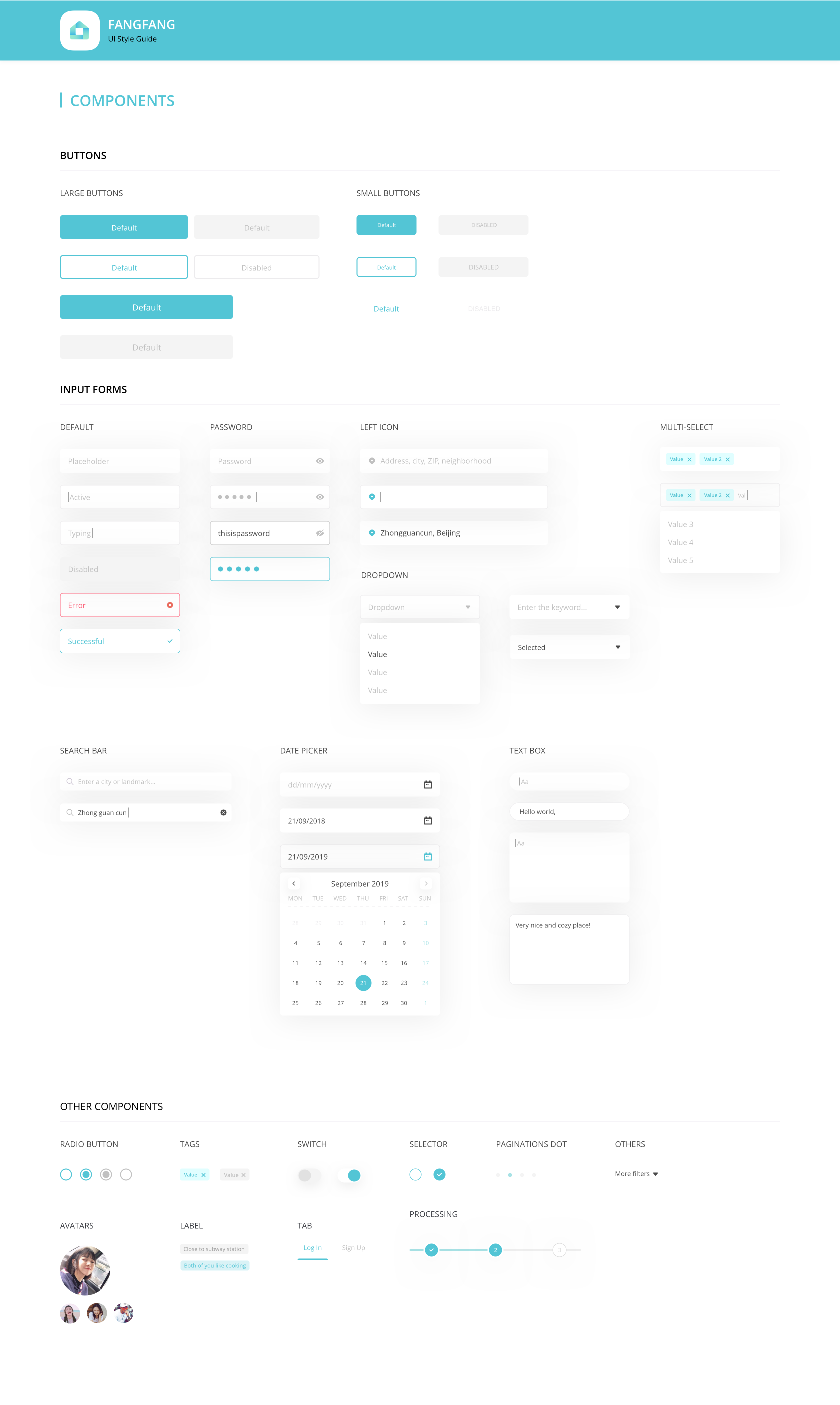 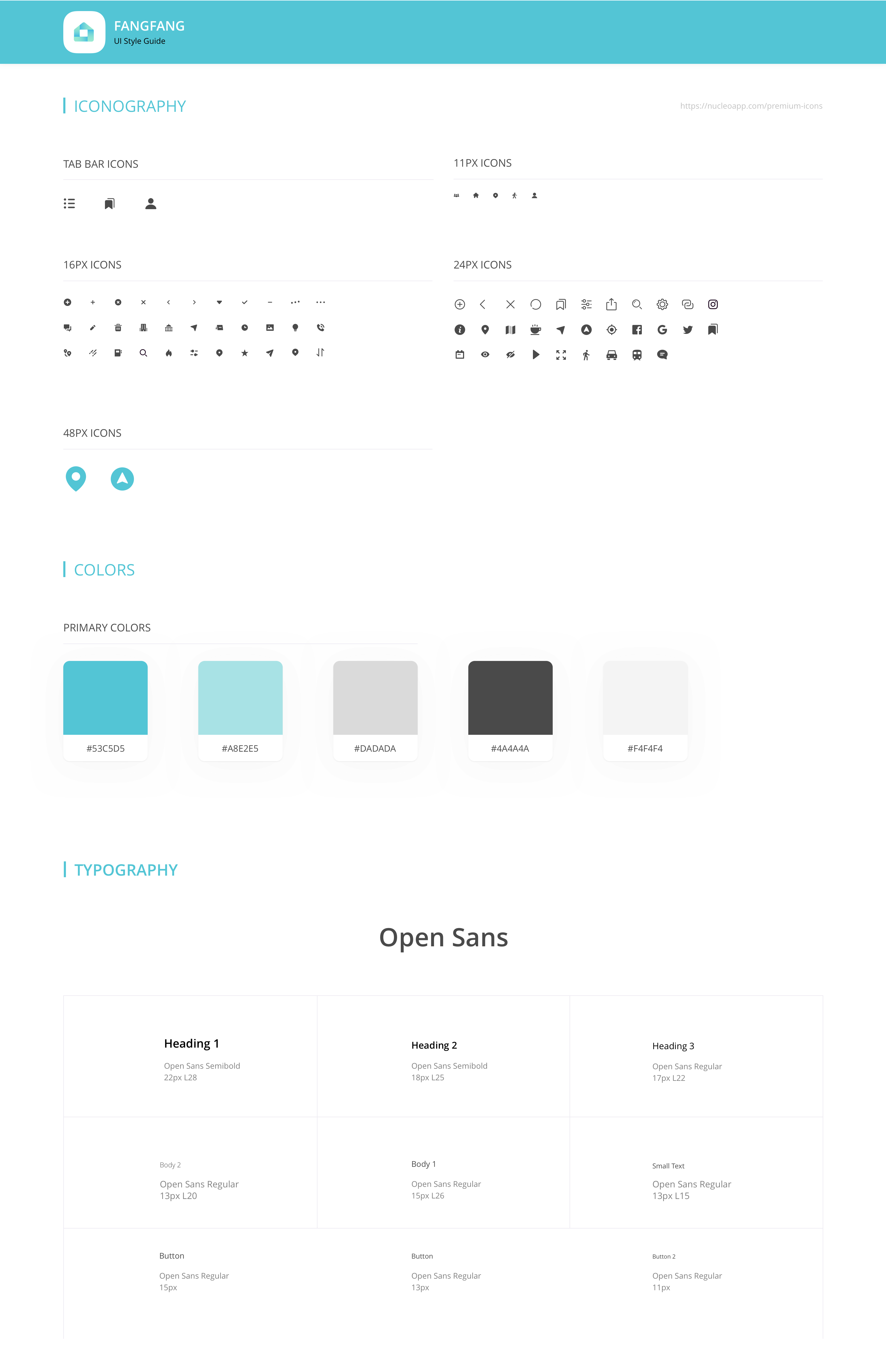 The conducted research and product strategy helped the design and product team at 58.com. I left 58.com after I finished my internship, but some design ideas from our brainstorming sessions are implemented in the app.

13/13 testers have positive feedback on this concept

60% of testers said they wanted this app

This was the first time that I got to know the real world, talk to people and help them solve their problems. Some features had launched on the 58.com app. I still remember at the end of the interviews, my interviewees asked me whether their voices would be heard. I said yes. I was really proud when I presented my research results to the company. Everyone was really into what I had found out. I made it, and I not only allowed their voices to be heard by the company, but also helped millions of users in China.

The biggest mistake that I made was trying to combine to many ideas in one design. When there are too many things in one app, people will feel lost. I learned this lesson, and learned how to prioritize things based on their impact.

This is not the end of this project, I still need to run a several rounds of usability tests and iterations to fix some design issues. 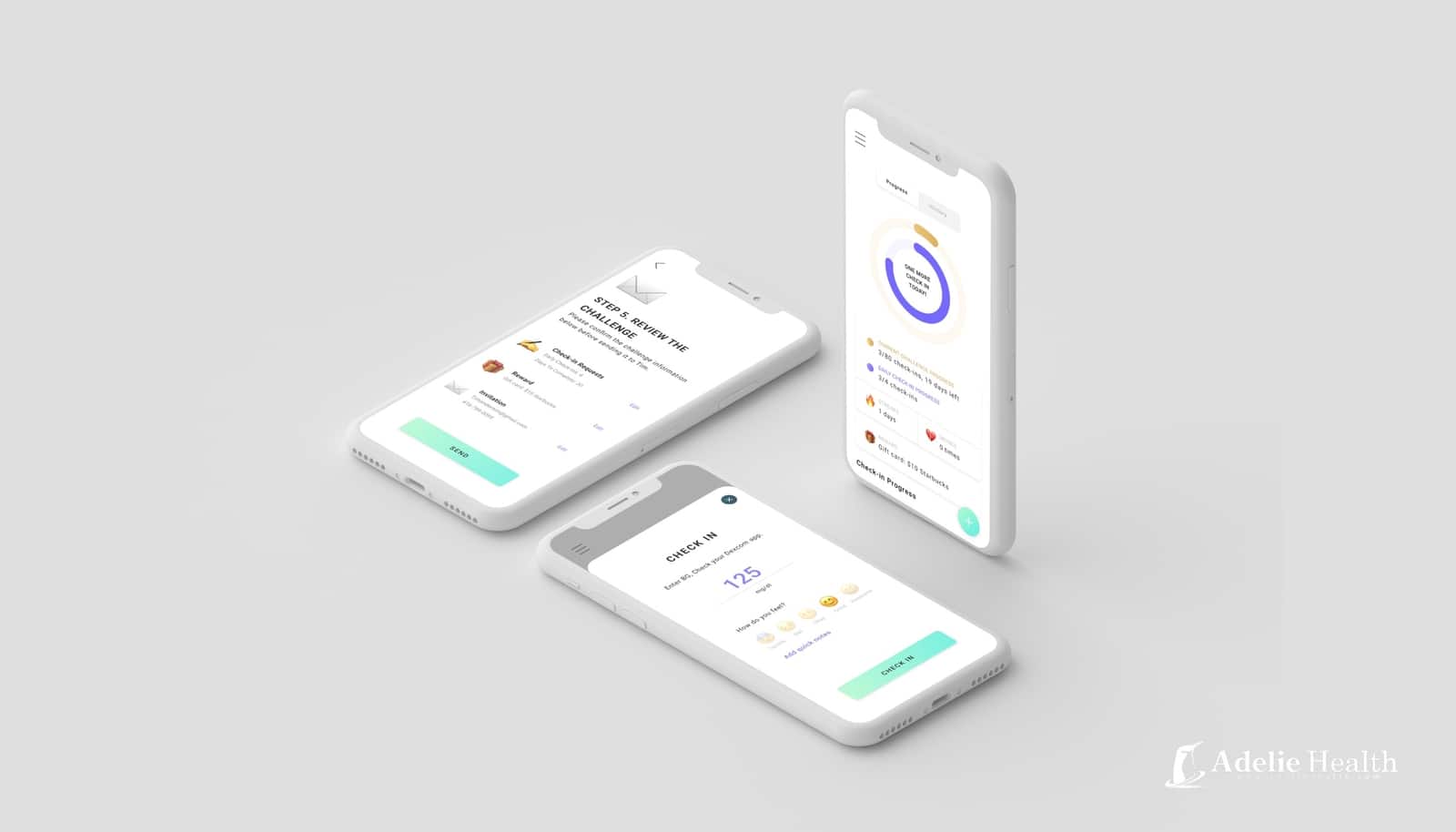